A wild dog chasing the sun! L.T.Leif is tender, burning, open. The warmth of the rough edge enters; it holds the sound in thrall. This is the many-hearted music of the swampwitch. Slow-felt swamp rock.

Based out of Glasgow and rooted in the DIY spirit of the Canadian prairies, Leif is also deep-dipped in Iceland, Finland, and the Pacific NW. Leif has been involved in many bands and projects, first entering the scene with orchestral pop sweethearts The Consonant C, strongholds of the Canadian DIY music scene. Since the group disbanded in 2011, Leif has explored many configurations and approaches, from experimental noise collaborations with the infamous Bug Incision crew, to playing sold-out shows with the  punk-hearted OK JAZZ. Leif also drummed with slacker-rock bands (Hex Ray and Hungry Freaks), played synths with Matt Swann (of Astral Swanns), and sang in a witch Choir (Hermitess). This, the band that takes Leif’s name as its title, is perhaps the most precise of these projects, and represents Leif at their most exposed. The themes are personal, reflective, and distilled, and the vocal and string arrangements carry an attention to detail that reveals a generosity and an openness of both heart and thinking.

Leif’s spirit is eternally collaborative, generative, experimental, and kind – the band members and the parameters of the project are often changing, but, as Leif says of the project: “to the friendships and the moment we are grateful and stay true”. LT’s admirers include K Records maestro Calvin Johnson (they toured together with The Believer Magazine), Woodpigeon’s Mark Hamilton (they had a band together with Iceland’s no.1 charting band), and Canadian mad sound-scientists JOYFULTALK (who recorded the latest album cross-continentally and at separate times). Leif’s work has been honoured through concert and collaboration with musicians across Canada, the states, the UK and the European North. Check the pals page for other musical projects and a longer list of members of Leif’s closer working crew.

“Listening to this album front to back feels like a passage. You get through something and then you are released. Into what? Hopefully a peacefulness like the dust that settles, or a quieting of some familiar beasts, finally witnessed, or the taking on of some gentler, wilder, form. This is not an album of love songs, but it is an album of love. Love of self, love of being, love of beasts. That variety of love means being with the dark and with the dirt. It is not a shiny feeling, but it is a thorough, and perhaps even a welcome one.”

Leif’s 2016 album, Shadow on the Brim/Rough Beasts is, in Leif’s own words “something like a werewolf on the edge of transformation”. The album spans themes of wildness, balance, polarity, death and morality. The production of the album was itself an experience of openness, spanning the country through collaborations with the two halves of what later became the band JOYFULTALK. Leif’s chilling harmonies and drone-laden aesthetic are woven through with sonic explorations, both in instrumentation and in production, between Leif, Jay Crocker, and Dice Parks. It is clear that the album took time, attention, and a deep level of generosity between collaborators. The songs, cutting in their content and brimming over with freshness of thought, are discussed more in depth here.

Shadow on the Brim

Shadow on the Brim was written around Leif’s return to the Albertan landscape after a stint in Toronto, a city where it was “hard to be wild”. Leif’s interests in ecology and the history of western thought fed into the themes of the album, which explore how the binary of good vs. evil is flawed, and even anti-human – pursuing happiness as a pristine state is a form of insanity, albeit a popular one. Dice Parks recorded Shadow in Calgary, adding his distinctive, unexpected compositional influence to the production of Leif’s tracks, as well as leading numerous instrumental improvisations, three of which they chose to include on the final album.

In Opening, the vastness of a city train yard stirs a feeling that it is that beast you need, speaking of the call and necessity of the inner wilds—although it also contains a warning: you gotta keep your wits about you/to know which of those beasts are best to leave unfed. A deep longing awakens here, something like the desire to feel the dirt between the pads of the feet—a feeling echoed throughout Shadow.

In Deep Bright, the self is conflicted, it wants to be two ways: both “good” by societal standards (read as “successful”, or even “easygoing”) and something else, weirder, that is truer to the self but harder to inhabit: and I watched myself/as if in a dream/go floating away. We can want to be many ways, and un-lived options can be actual loss.

There That Ambition has Leif further contending with the struggles of the ego,  revelling in the powerful force even as it’s recognized as something unbalancing or destructive.

In Derelict, she finally gets down on her knees in the dirt and stays there, breaking into an abandoned house to sneak around tenderly/until I am covered in/some kind of dark sin. Perhaps a more tender and vulnerable beast emerges, carrying us to the flipside of the record, afloat on Parks’ gentle drones.

Rough Beasts came as a reflection on both being animal and on needing to befriend and not reject or destroy our inner beasts. “We need them”, Leif adds, “They are where our power is, and our inner life. Even if they’re a bit haggard and hard to be around”. It is an album about compassion towards both the inner and the outer animals, and “it came as a struggle”. Rough Beasts was recorded with mad-sound-scientist Jay Crocker at his backwoods studio in Nova Scotia, where he and Leif struggled but found, in the end, a sound and style of working together that both preserves Leif’s vulnerability and somehow expands it outwards, building gently with contributions from guest musicians Sara Froese, Neal Moignard, and Jon McKiel.

Rough Beasts has a more innocent undertone, the aforementioned werewolf-esq transformation still distant. Puff Ball Thing, arguably the only love song on the album, crones do we ever change? do we ever become unsnagged? by the old loves. But again the wildness and the openness enters, as that love transforms into a puff ball mushroom that our protagonist kicks accidentally, its seeds spreading even as the tangibility of the feeling dissipates. Everything changes, and we are changed, but we are also still out there walking.

Dreams like a Dog tells the tale of interspecies child-rearing, as first a squirrel is saved with an eyedropper, and then a child by a pack of wolves, again opening the question of love, change, and longing: once returned, the human child’s family mourns the loss, while he sleeps in the corner, he dreams like a dog.

Drk Dwllr has at its center a search for an unknown thing, and a question about perception. It has a restlessness. A hunt turns up empty, but then everything encountered along the way shows up at the end roaring: come back to the dark night/oh there was something in all that you saw/but if you hold to/only the dark night/you will find something there/but there is so much more. Sara Froese shines on this track, her harmonies and string arrangements adding a sublime eeriness.

When Dontdonut begins, its interlacing, laid-back rhythms come with a sudden distance. Inspired by a friend who was killed far from the city she loved, this song is a spirit calling over her shoulder towards her home as she travels on: Don’t send my words to them, long shadows in the grass/just send all my best wishes back.

Fine Dust Rising stays with the topic of death, centering even more snugly around the moment of leaving or departure. Written for Leif’s departed grandmother, who waited until she was alone until your head tipped back opened your mouth/a place to let the spirit out (which has a certain resonance with the act of singing). The lyrics are thick with the landscape her grandmother loved: the dusty valley of the Crow’s Nest Pass, where nearby a rockslide once covered an entire town, still buried. At the end of the song and the end of the album, the soft dust settles: a silence like dust rose up/an avalanche’s aftermath settled where you’d been last.

Listening to this album front to back feels like a passage. You get through something and then you are released. Into what? Hopefully a peacefulness like the dust that settles, or a quieting of some familiar beasts, finally witnessed, or the taking on of some gentler, wilder, form. This is not an album of love songs, but it is an album of love. Love of self, love of being, love of beasts. That variety of love means being with the dark and with the dirt. It is not a shiny feeling, but it is a thorough, and perhaps even a welcome one. 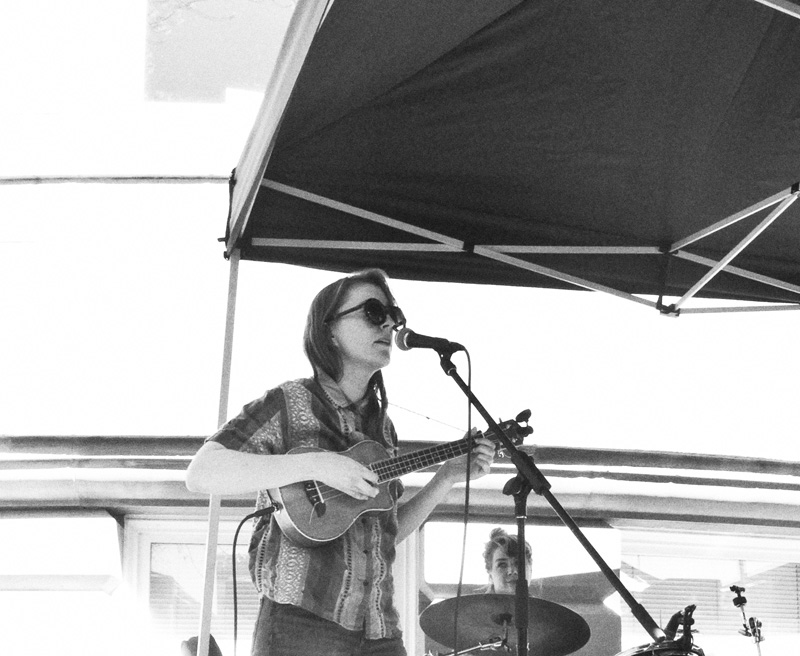