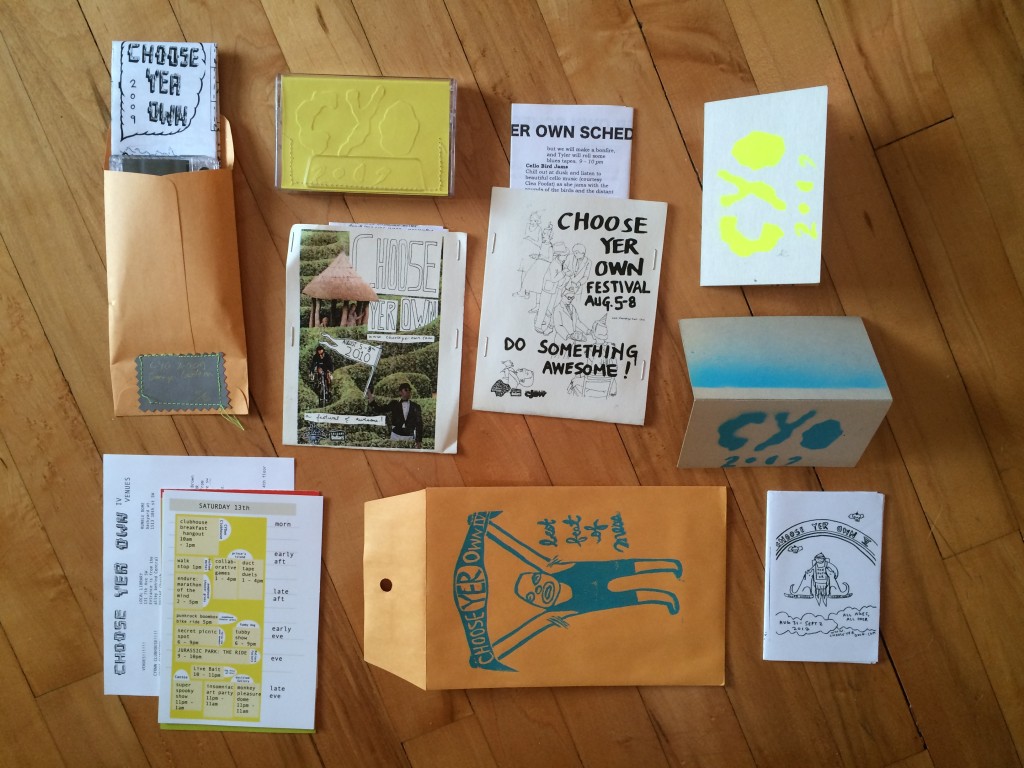 In an attempt to improve Calgary’s self esteem, myself and a rotating cast of collaborators created the premise for an interactive, inclusive, place-based festival. Happening from 2008 – 2014, we invited strangers and friends to submit any idea for an event for inclusion, however improbable, magical, or impossible it seemed. We would find a way to make the event happen, and an open-ended task force of friends and volunteers would come together to realize the festival over the course of one week. The emphasis was on unusual spaces, alternative resources, and on trying something new. Over 120 events took place over the festival’s history.

“Choose Yer Own is a festival based on sweet adventure. It is about being able to choose your own level of involvement, because feeling like you belong to a place is so important to caring about it. It is about actively creating the culture that your want to live in. Choose Yer Own is a collaborative festival. Anybody can put anything on, which means the festival is always unpredictable and surprising, and also meaning that the festival is built and owned by you: the participants, passer-bys, and accidental organizers of the various events. The festival tries to use unusual venues (abandoned spaces, liminal spaces, public spaces…) that are all within biking distance of one another, encouraging exploration and interaction with the city. The only rule of the festival is that all submissions have to encourage people to engage more with their city, whether it is the people or the places that they pass through, and also (of course!) that nothing can be hateful in content or delivery.” www.chooseyerown.com/all-about 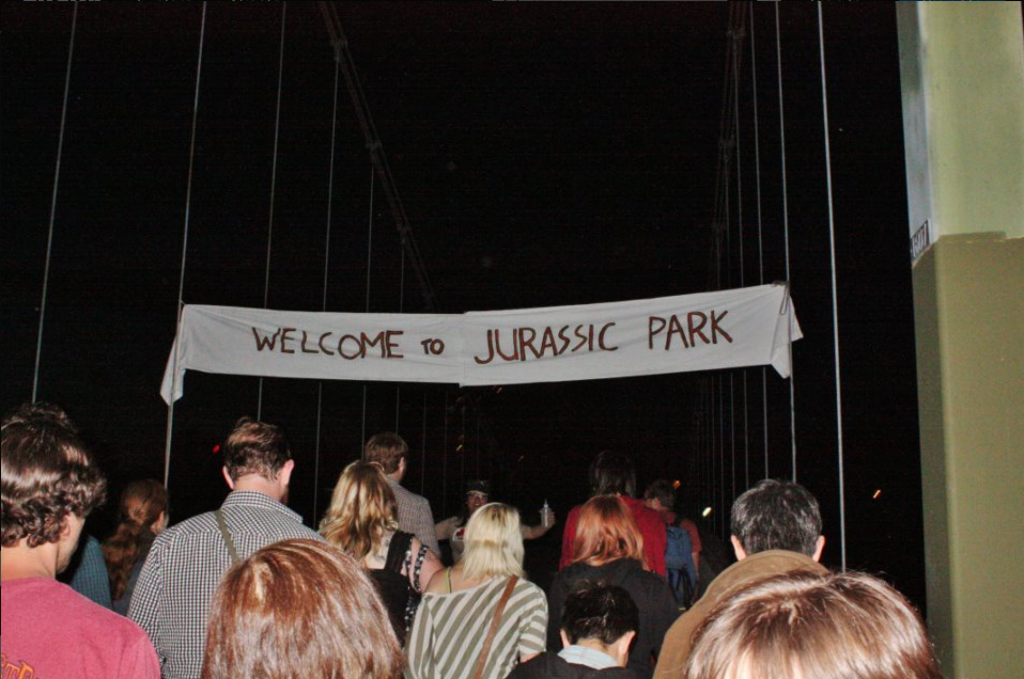 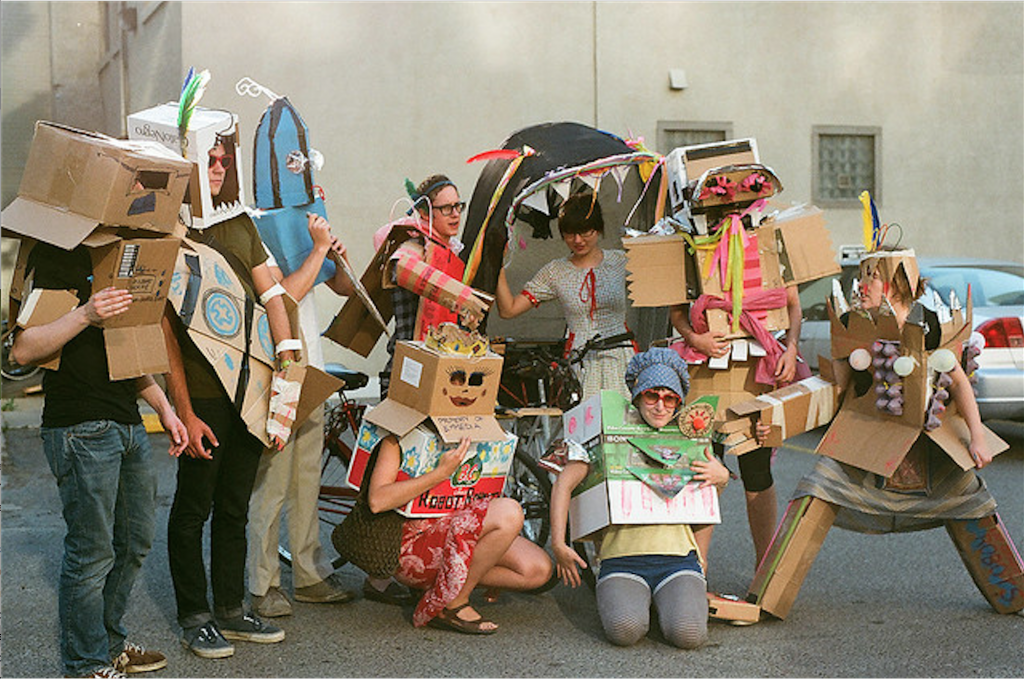 Participants built robot costumes out of garbage and then battled in them until they were destroyed. 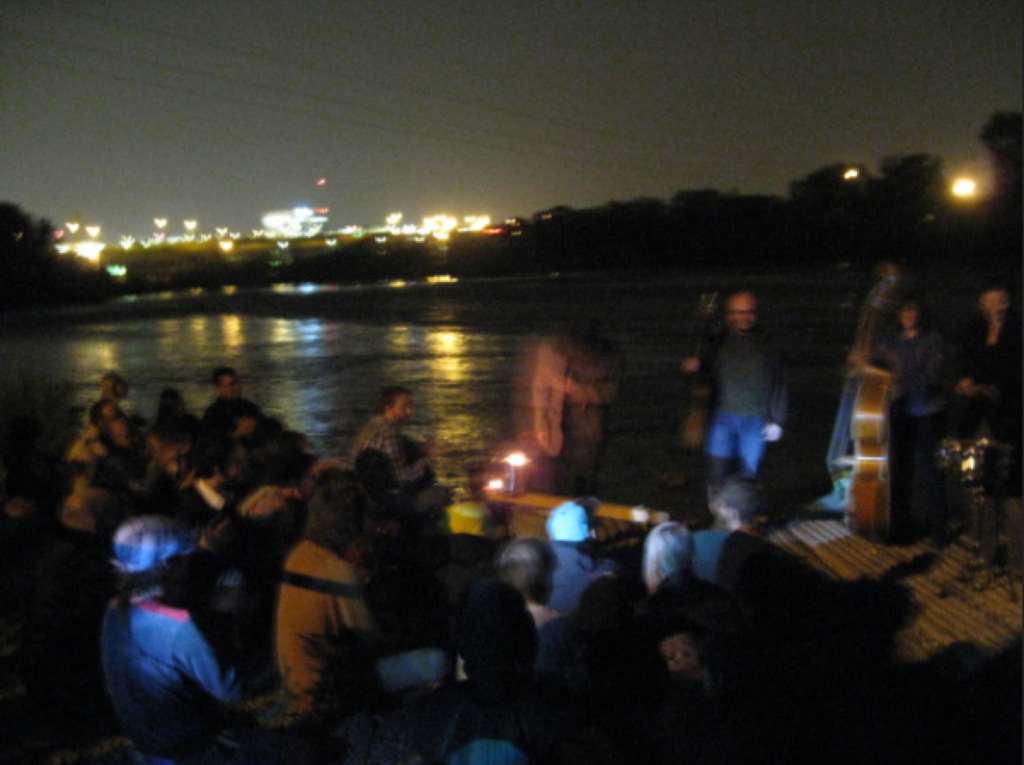 COVERS UNDER A BRIDGE

One of many renegade outdoor events, where audiences would be given directions to an undisclosed and underappreciated location where something interesting would happen. In this example, musicians playing cover songs under a bridge. In others, a cellist in a bird sanctuary improvising to the sounds of trains unloading, first-time stand-up comedians performing in an alley behind a burger joint, or a ghost story telling in the basement of a museum.

An interactive audio landscape that participants manipulated by petting 6 friendly dogs. Select public were given conductive batons. When they then made contact with a dog, they complete a circuit, triggering a sound. Each dog controlled a different sound; the humans created unique compositions by petting different dogs. The composed audio aims to be soothing to both human and canine ears.

The project explored boundaries between strangers, audiences, creators, and dogs.The challenge was to help people feel comfortable and excited participating in a public sound piece. We were interested in exploring the possible role of trained, friendly dogs in bridging creative interactions between strangers. The ambient composition was created as background music for a busy street – it was also background music for many spontaneous interactions. 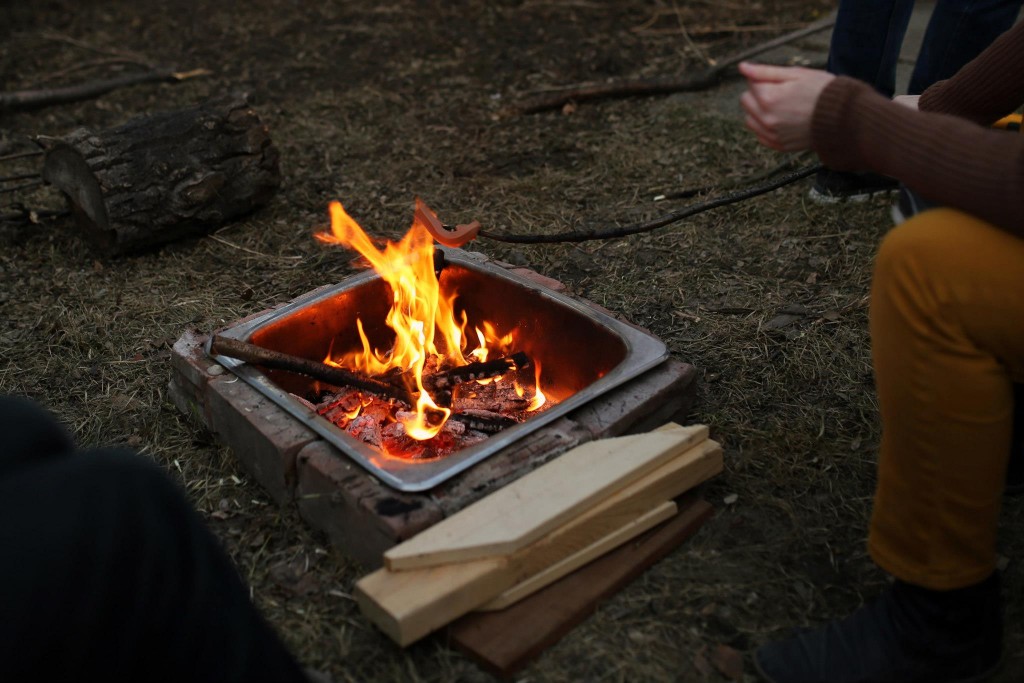 As a part of a project that transformed “9 houses, 3 garages, and a greenhouse scheduled for demolition into temporary art, installation, and performance spaces”, we created an homage to the human history of the neighbourhood. Tipping our figurative hats at the literal stories of neighbourhood games played in the surrounding back alleys and side streets, community pubs, and  at backyard barbeques, we created a site where strangers could play street games together, hang out, and consider the implications of the changing cityscape on our shared domestic experiences. The structure and the vast majority of the game props were built out of materials salvaged from the surrounding houses. 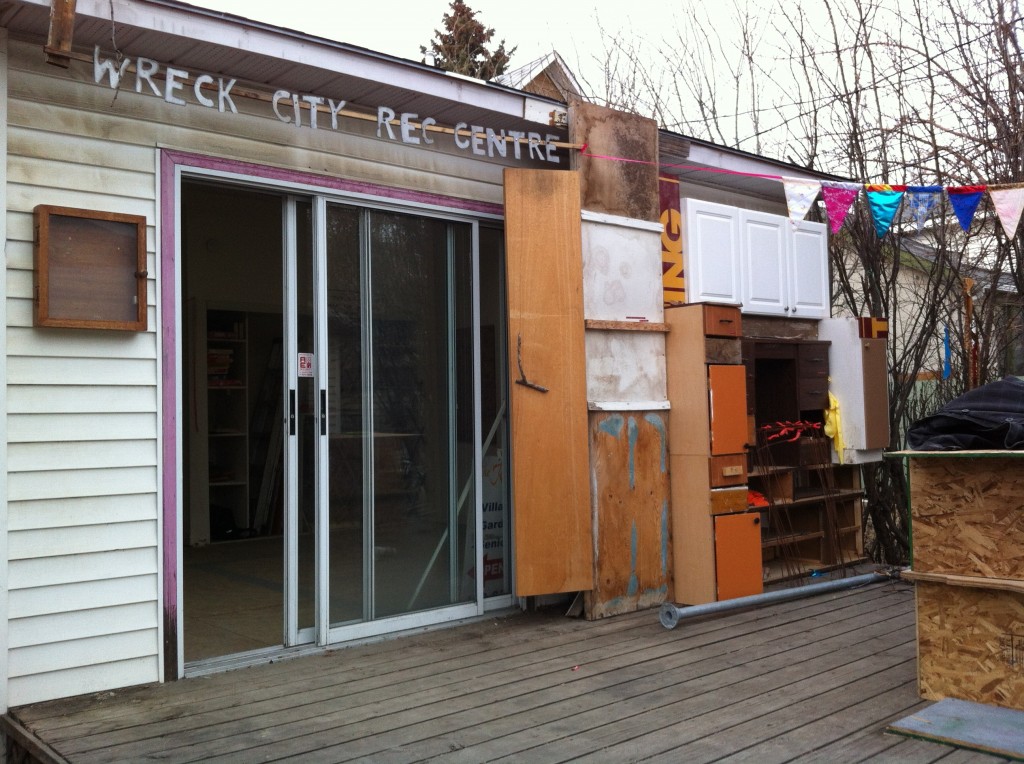 Detail of the fire pit, built out of bricks and a salvaged sink. Fireside activities included a screening of classic Canadian television and post-game marshmallow roasting. 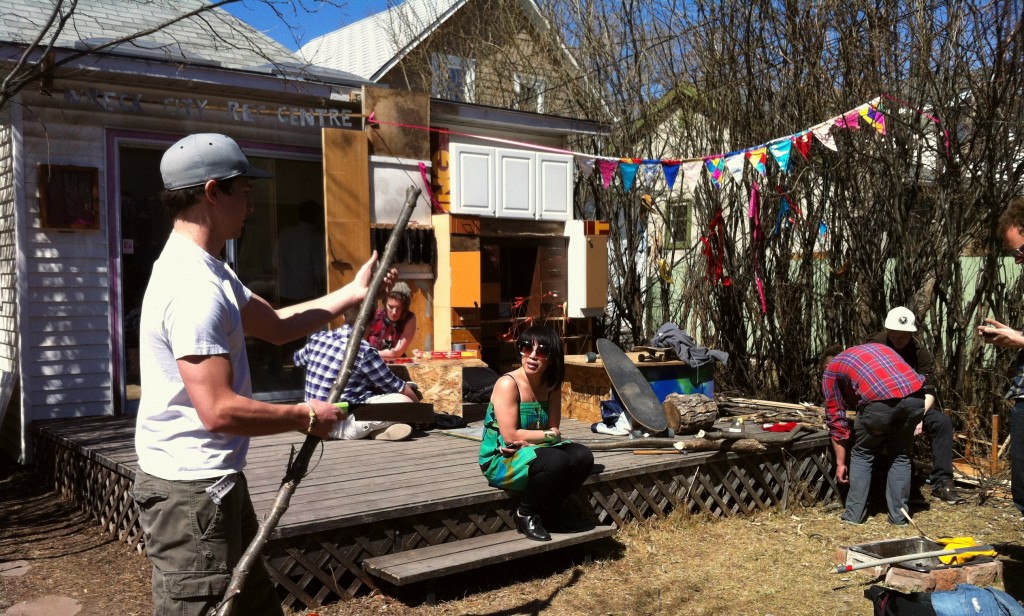 Pictured here are strangers helping us build hockey sticks for a game of street hockey, people hanging out, and participants playing board games. 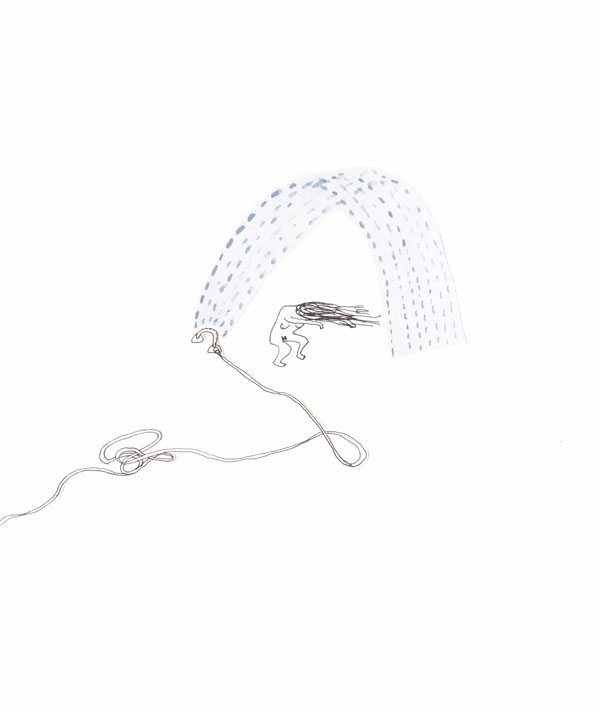 givin ‘er. Ink and watercolour drawing. Released in the OK Jazz zine by the CYOR, 2015.

Track from album “Shadow on the Brim”. Written and performed by Leif, recorded with Shawn Dicey. Released on The CYOR, 2016.

but no matter where I go, when I go far enough away
I just feel cold.

And I watched myself
as if in a dream
go floating…

Short film for a friend’s book about a missing child. Featuring experiments in shadow puppetry, salvaged slides, and found footage. 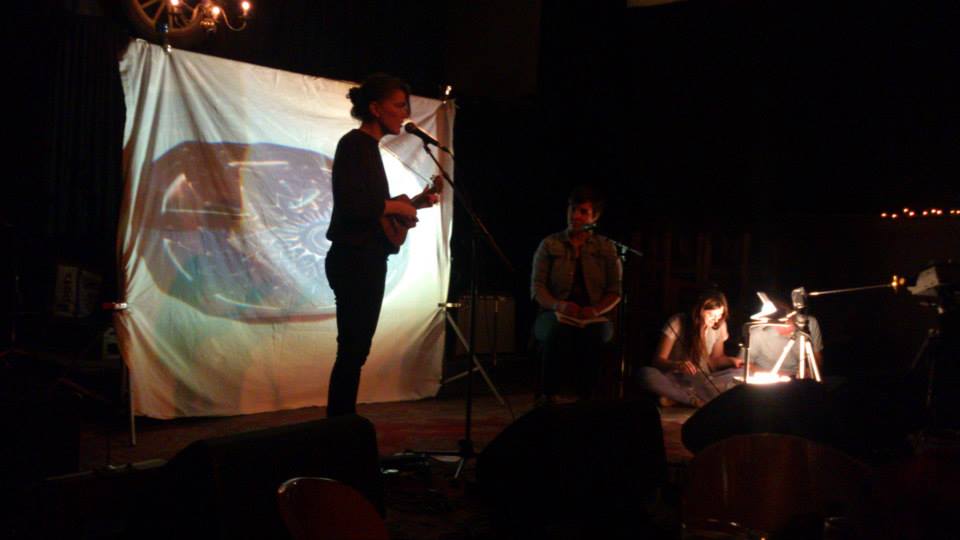 I see stage performances as having a lot of potential, and often experiment with different visual elements, installations, and collaborations for my live shows. This began in 2008 with the founding of the Summerwood Warren, and continues to this day. 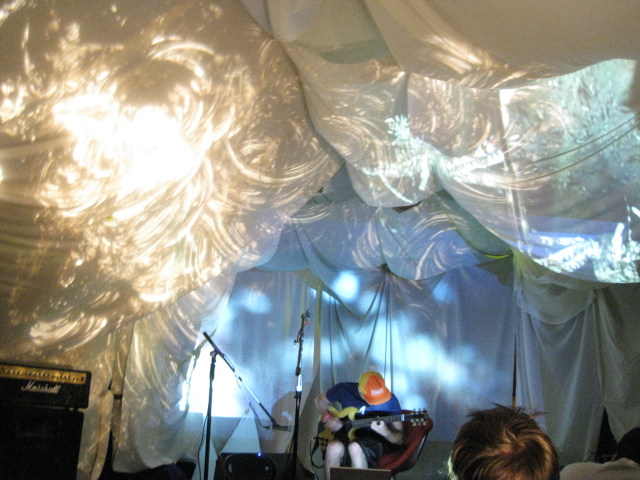 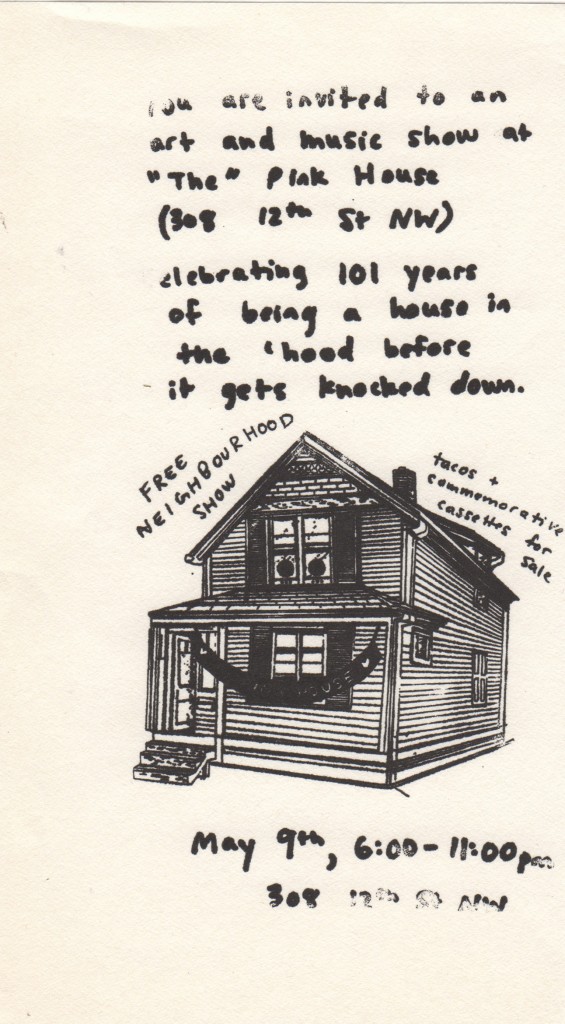 PINK HOUSE Invitation to the Party

Public neighbourhood event held in commemoration of the Pink House prior to demolition. Included live bands, visual art displays, tacos, home brew, and the release of the cassette (previous slide). All the neighbours were invited (including the landlord), and all recent residents participated. A playful and also heartfelt look at community, neighbourhoods, gentrification, the housing crisis in Calgary, and the myriad of assumptions that go along with these issues. 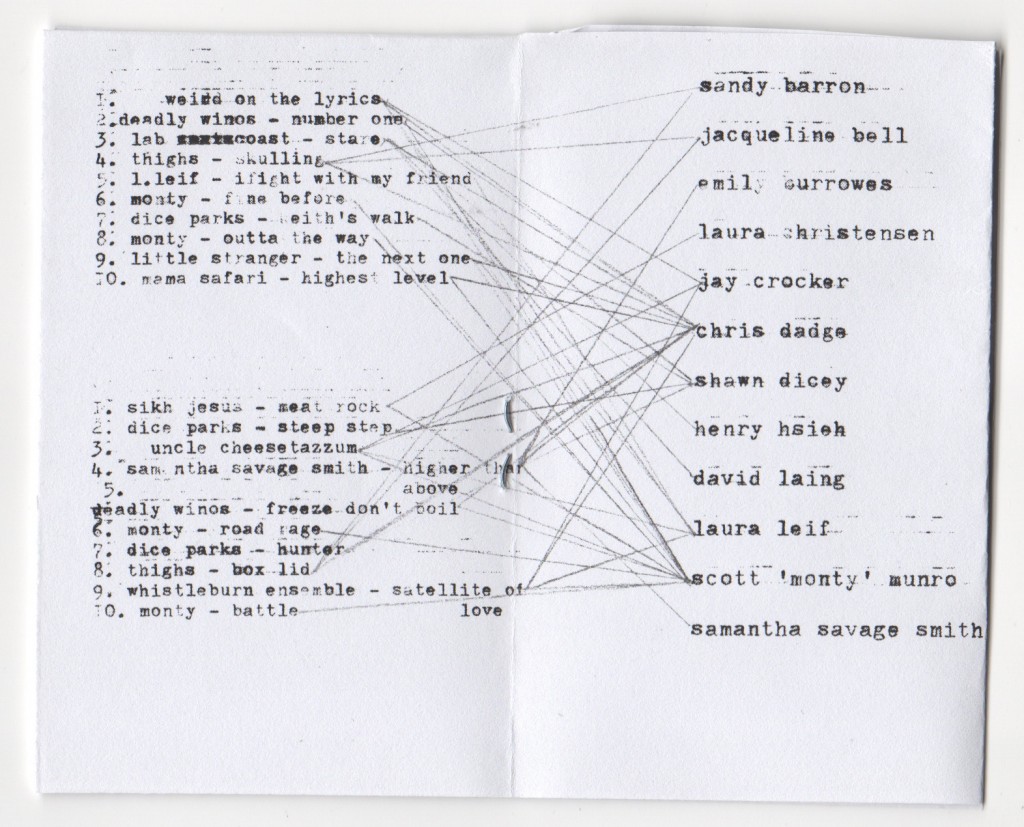 Commemorative zine and cassette created in celebration of a house slated for demolition that had been in the creative community for many years. Featuring visual art and music created in the house. This diagram details the collaborations present in the songs themselves. 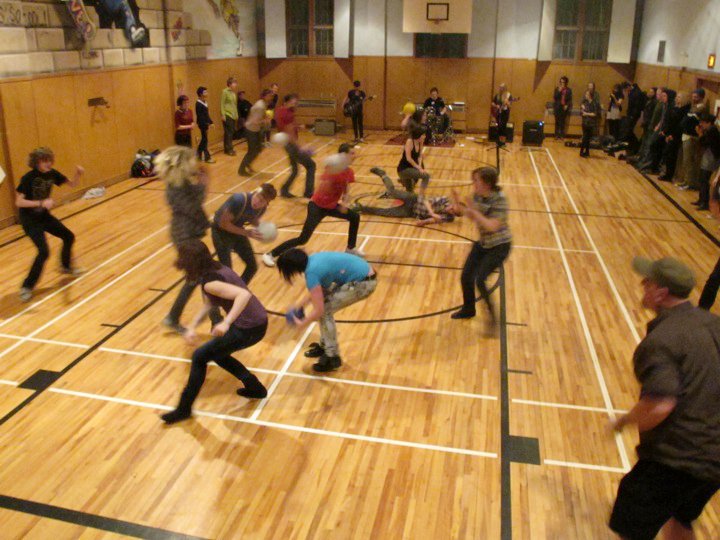 Our events at the Local Library were often interactive, multi-dimensional, and playful. At this the opening show for the local library, punk bands played music while the audience played dodgeball. For our apocalypse show, audiences learnt survival skills, ate dinner out of unmarked cans, and watched a play about bros at the end of the world. 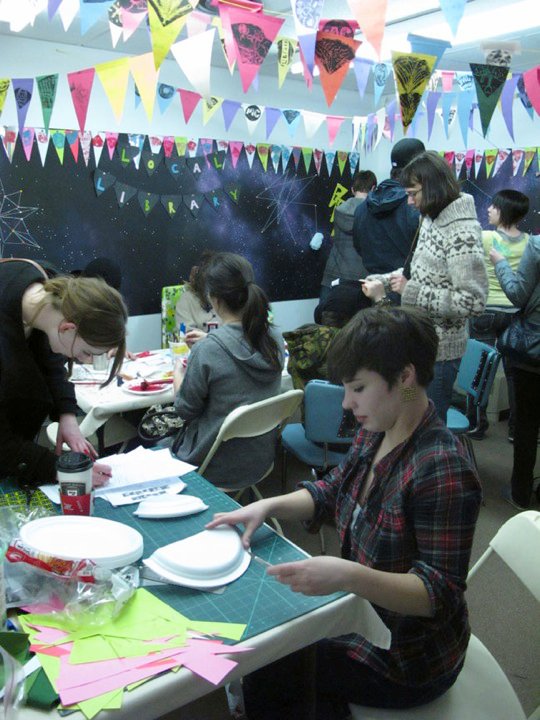 The Local Library was an all-ages arts space that we ran from 2012 – 2014, holding shows, workshops, art exhibitions, and a guided open studio. In  this image, participants at open open studio contribute to making props for a re-enactment of “The Labyrinth” and work on their own projects. 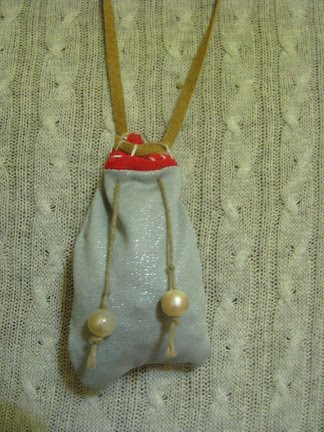 OBJECTS OF OUR DESIRES Domestic/Cathartic detail

Objects of our Desires was a collaborative project undertaken in collaboration with Amber Phelps Bondaroff. Over the course of ten days we wrote, recorded and performed eight original “serenades” for household items that needed cheering up after many arduous days of Montreal winter gloom. Performances involved handmade costumes, activities, and gifts. The participating objects (as well as some plants and animals,) were submitted by their human owners prior to the commencement of the project. Through the inquiry as to why a particular item was selected by it’s owner, and the exploration of its physical properties, we observed many parallels between the inanimate/domestic item and the human. 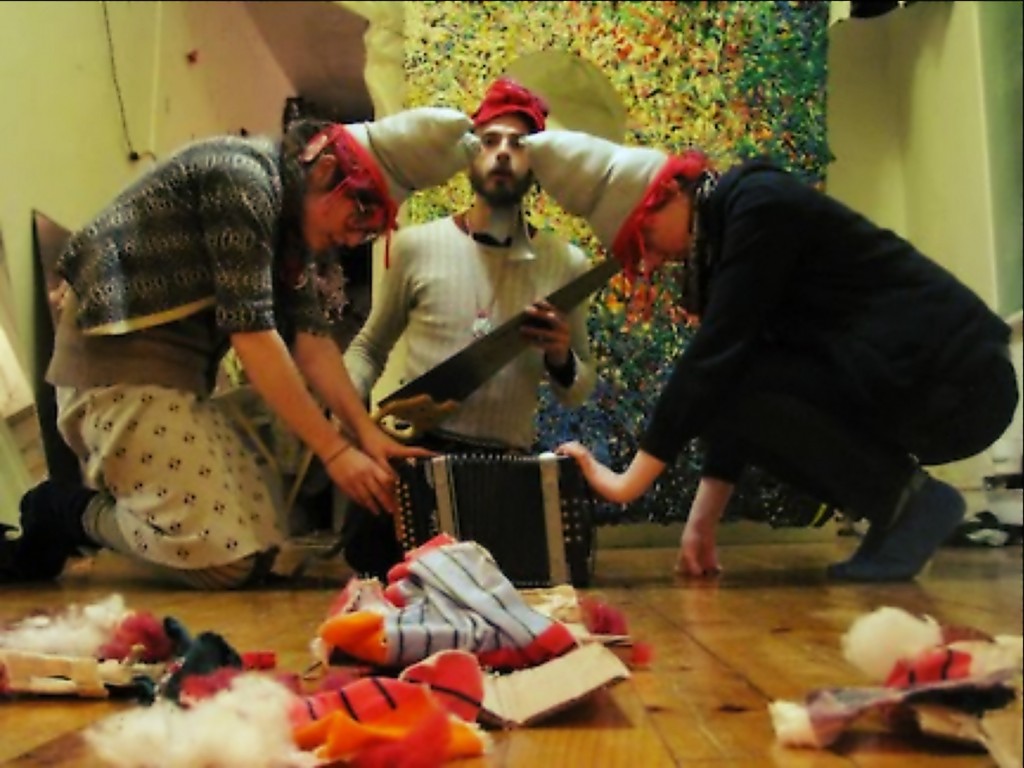 OBJECTS OF OUR DESIRES Domestic/Cathartic 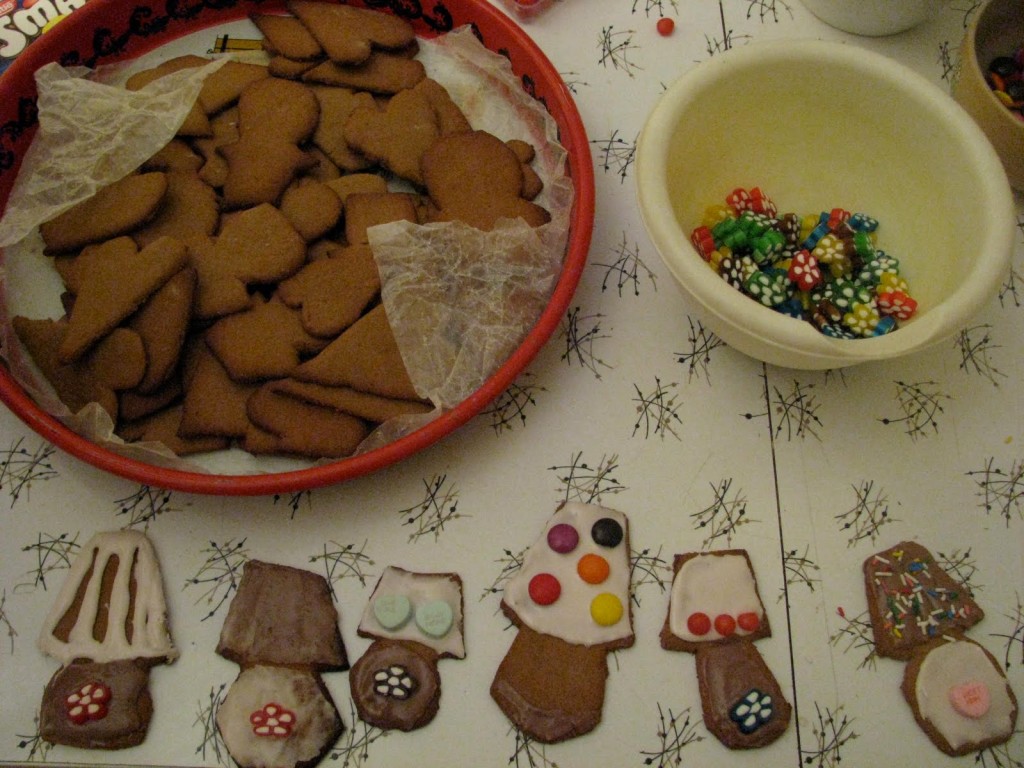 20. Objects of Our Desires: Love Song for Lamps detail 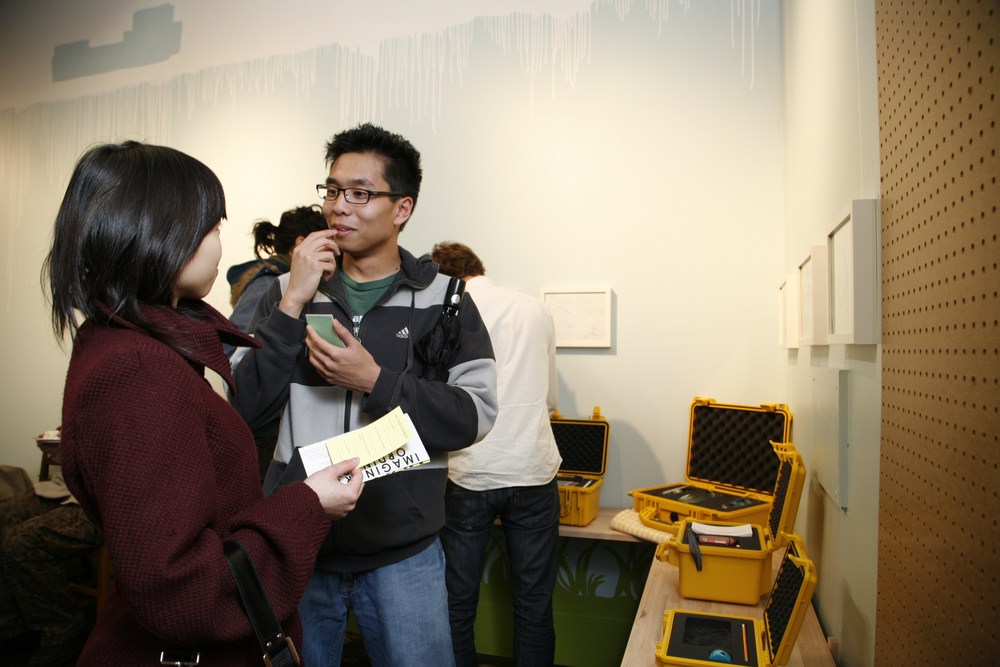 Take away kits and activities were available for community members to sign out. These included kits to have a romantic drink in the park, go birdwatching, interview your neighbour, draw the clouds, say something with a megaphone, guerilla garden, or make a movie.. Resulting videos, interview answers, and collection cards were displayed in the space.

Pictured here are participants interviewing each other with the “interview your neighbour” kit. 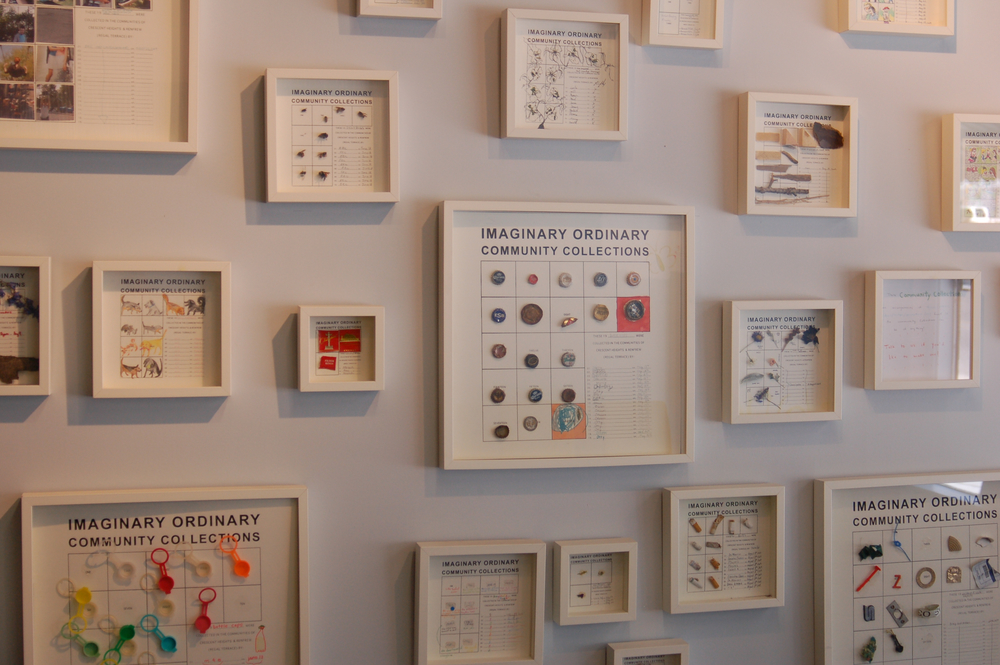 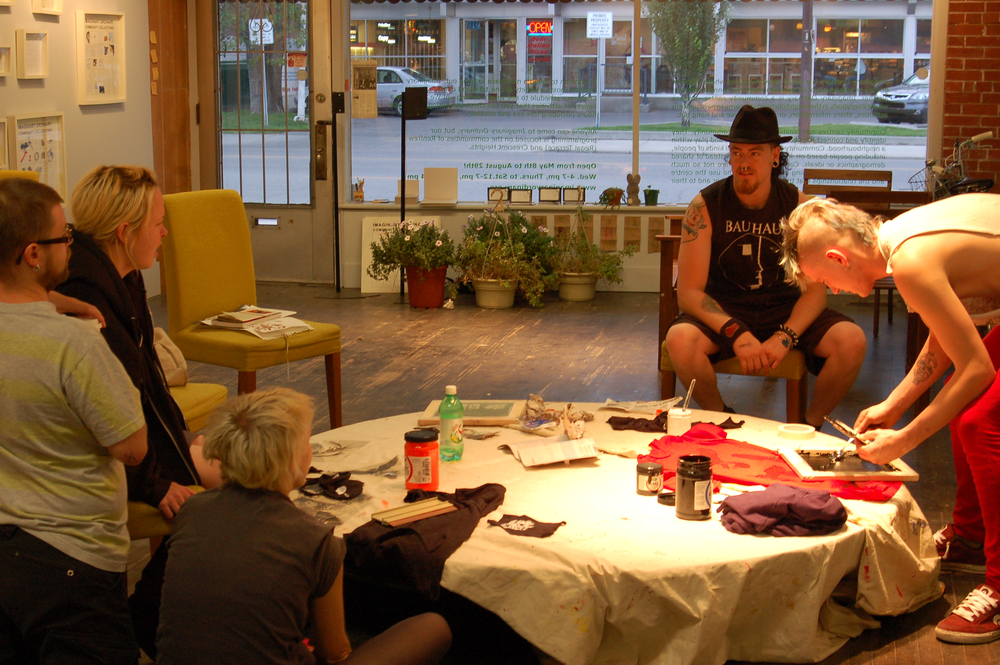 Open for 4 months, Imaginary/Ordinary took an unused, derelict storefront and turned it into a site for social engagement. Home to nearly 50 events, take-away kits and projects, free tea and cookies, community-members-in-residence and countless encounters, we sought to use the space as a way of mapping an entire geographic community.